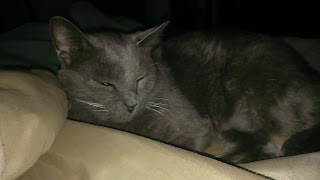 Sissy dragged this fellow in. Someone dumped him here and she worried about him going to our neighbors (the jerk that shall not be named). Beans hoped he'd be a blast for Tyson but alas no. They named him Antonio since he is the tag team partner of Tyson (we are all named after wrestlers, hence thats why Angle is Angle and not Angel ((wrestlers have such pretty names)). he about had a heart attack his first day here, scared of the pups. Beans are working on getting him comfy. Hes been here about a month but still wary of the pups. He eats well but has stress hair loss. Hes a full fellow as he likes to eat.
Posted by THE ZOO at 7:15 PM

Thank you for taking care of that lost sweetie.

Brian is right!
Bless you for taking in Antonio.
He is a nice looking kitty.
We wish beans would not be so stupid and mean!
Purrs Georgia and Julie,
Treasure and JJ

Why are so many Beins jerks? Dont they unnerstand that we deserve respect and homes?

As formerly homeless cats ourselves, we are always happy to read about a brother cat who is fortunate like Antonio. Bless you for taking him in.

As formerly homeless cats ourselves, we are always happy to read about a brother cat who is fortunate like Antonio. Bless you for taking him in.

That is so sad that he was dropped off, I am glad you rescued him. Many of my cats came to use the same way.

Hope he relaxes and enjoys living there. It took Micah a while because of Percy but within a couple of years he had turned the tables and was picking on Percy.