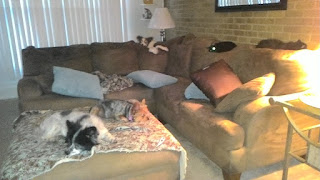 Beans are getting us a new couch. Matched the one in the living room, this is our den. So beans had to find a home for the current couch and did. When the people came to pick the couch up, Chyna ran around like a crazy kitty, shes the only kitty that didnt get put away. She ran under the couch and up in it Sissy tried to squirt her out and she went up in. Beans didnt know and luckily one guy dropped his end and Chyna camed running out. She was all up in the couch, so far beans hadnt seen her. She ran back and tried to crawl under a door but of course couldnt. Sissy came and after another chase Sissy opened the door and she flew into a bedroom. She calmed down an hour later. Her and the beans got very lucky. 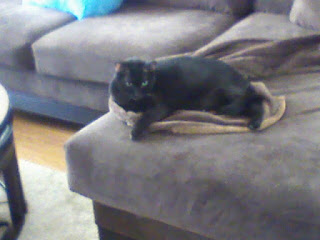 Good think Chyna came out or she may have gotten a new home :o
Purrs Georgia and Julie,
Treasure and JJ

That would have been awful if she got taken away with the old couch.

It sure would have been. We are all loved very much and equally here but Chyna is Sissys baby and was such a pitiful little baby when she moved in, it would've killed the peeps.