WE NORMALLY GET ALL PUT UP WHEN MOMMA ANS SISSY EAT BUT THIS TIME ME AND SNOWY GOT TO STAY OUT ( CAUSE WE ARE THE MEN OF THE HOUSE) (MOMMA: NO BLADE YOU PING THE DOORS AND TEAR THEM UP NAD SNOWY IS SUCH A GOOD BOY). MOMMA WAS WATCHING THE TV AND ALL THE SUDDEN THAT OLE WIMP SNOW SHOUWED WHAT HE IS MADE OF AND GRABBED FOR THE STEAK WITH HIS TEETH. HE DIDNT MAKE IT AND BIT THE PLATE INSTEAD. ALMOST MADE A BIG OLE MESS. BUT I LAUGHED SO HARD. FINALLY THE ALPHA IS SHOWING HIS KUHUNAS.
Posted by THE ZOO at 3:49 PM 3 comments:

WHEW...
WE GOTTED SO TIRED TAKING CARE OF SISSY. SHE WOULDNT SLEEP (I COULDNT) AT ALL SO WE COULDNT SLEEP GOOD (RIGHT ON TOP OF ME). SHE WOULDNT NOTHING WHICH WE JUST DONT UNDERSTAND AND HADDED A FURRY HOT FOREHEAD. WE IS JUST HAPPY HAPPY THAT SHE IS BACK TO NORMAL NOW SO WE CAN EAT HER FOOD AGAIN.
Posted by THE ZOO at 12:37 PM 2 comments:

SORRY SISSY IS SICK WITH BRONCHITIS WILL BE BACK THIS WEEKEND HOPEFULLY
Posted by THE ZOO at 10:22 PM 5 comments: 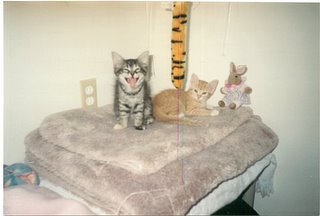 HERES A PICTURE OF MOLLY (THE GRAY CALCIO) AND IVORY (THE GINGER TABBY). BELIEVE IT OR NOT THEY'RE TWINS. MOLLY IS BEGGING FOR FOOD HERE SOMETHING IVORY NORMALLY DOES.
Posted by THE ZOO at 11:43 AM 6 comments:

PROBLEMS WITH THE JUNGLE GYM

WE ARE ON THE NOTIFICATION LIST FOR WHEN THIS COMES AVAILABLE. OF COURSE THEY DONT KNOW WHEN THAT WILL BE. WE WERE GONNA GO GET IT TONIGHT.
Posted by THE ZOO at 5:30 PM 5 comments: 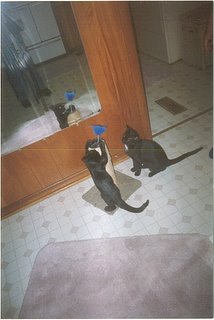 FLAIR WATCHING ANGLE PLAYING ON THE SCRATCHING POST
Posted by THE ZOO at 1:15 PM 3 comments: 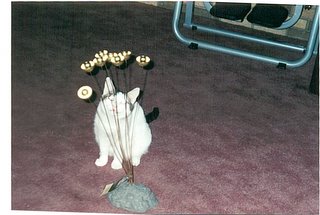 SNOWY CHECKING OUT THE NEW WIND CHIMES
Posted by THE ZOO at 11:14 AM 6 comments:

MOMMY SAID THAT WE CAN GET THE KITTY JUNGLE GYM FROM TARGET THAT JOAQUIN GOT FOR HIS BIRTHDAY FROM TARGET. WE IS SO EXCITED. WE ALREADY GOTTED A CUBE FROM WALMART TOO. ITS A BLAST.
Posted by THE ZOO at 10:21 AM 3 comments: 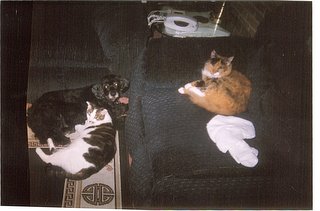 salem with puppy malcolm in the floor and shawn cuddling up with him. this is her favorite way to be
Posted by THE ZOO at 10:02 AM No comments: 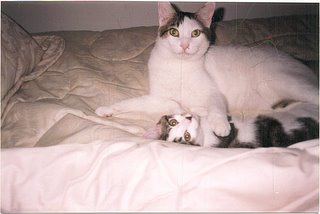 SNOWY IS THE CAT THAT IS MOSTLY WHITE CAT ON TOP. SHAWN LOVES HIM SO. HE THINKS SNOWY IS HIS DAD BECAUSE THEY LOOK SO MUCH ALIKE.
THIS IS SHAWN WHEN HE WAS A BABY KITTY AND SNOWY WAS ABOUT 5 YEARS OLD. SNOW IS A VERY NURTURING CAT THAT IS WHY HE IS THE ALPHA MALE OF THE HOUSE.
Posted by THE ZOO at 5:01 PM 3 comments: 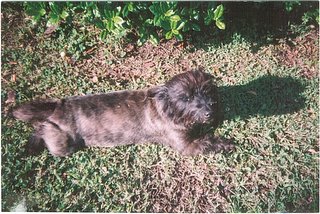 OUR LITTLE DOG
Posted by THE ZOO at 10:56 AM No comments: 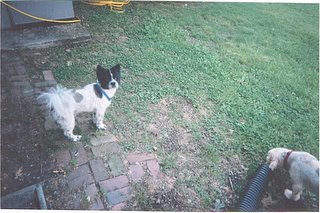 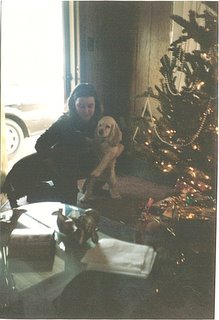 MALCOLM AND SELENA AND ME AT CHRISTMAS 2004. MALCOLM IS THE BLACK ONE AND SELENA IS THE BUFF ONE.
Posted by THE ZOO at 10:41 AM No comments:

IT IS NOT FUNNY SISSY WHEN YOU TRY TO REPLACE MY KICK BALL THAT I CHASE AND RUN WITH AROUND THE YARD, WITH A HUGE YOGA TYPE BALL THTA I CANNOT EVEN GET THE BITE ON.

YEAH I HERE YOU OVER THERE LAUGHING.
ARE YOU GONNA BE LAUGHING WHEN I TEAR UP THE HOUSE FOR THIS?? WE'LL SEE WE'LL SEE.
Posted by THE ZOO at 3:41 PM 1 comment: 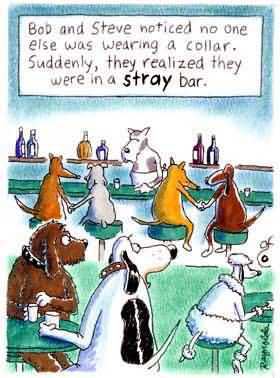 we were eating chicken last night and every dog was outside and all the cats put up but blade because he pings the door.
we were eating on trays and maam turned her head and a a big black paw came up over the side of the couch got the chicken(a whole breat) and pulled it back down.
she turned back around and her chicken was gone.
Posted by THE ZOO at 9:58 AM 4 comments: 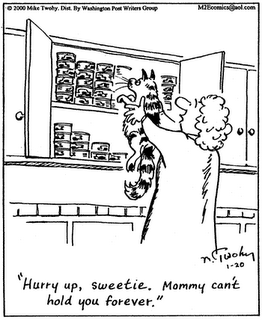 we have
salem: our spoiled 1st cat inside. she is a 9 year old calico. shes the alpha girl and just spoilt rotten
snow: 10 year old white cat with black on his head and tail. alpha male. a good boy.
blade: 6 year old blackie that is a mess who wants snowys alpha male postion and tries to fight him. he was rescued alone on the streets soo hungry he was convulsing. very sweet.
shawn, rocky and stevie: 6 year old triplets ( s & s are boys and rocky is a girl) who were gonna be drowned if we didnt come get them all. these are the mose loving cats ever and rocky is ruint. she thinks that all our food is hers too and will eat ours. but she is a good girl and eats her catfood too. rocky and stevie are black and shawn is white withe black on his head and tail and half his back.
hunter and chyna: 5 1/2 year old boy and girl twins solid black. they looked like bats when they were babies. they are just beautiful now. they are very sweet and greatful to be there. they stayed to themselves when we got them because they had already been to 4 homes and were only 3 months old.
benoit: he is a 5 year old long haired blackie. he is very skittish. dont know why. but he is a bounning tiggery cat. bounces around the house. he is the only one salem will tolerate. he is such a good boy.
molly & ivory: molly s a gray calico and ivory an orange tabby but they are 5 year old twins that were found in a garage smelling of gasoline. ivory thinks that smowy is her dad and loves him dearly and molly is a milk drinking girl. she always sits in front of her bowl crying out for milk. where as ivory thinks that she should be eating on crystal and eating cavier.
raven: she is a 5 year old long haired orange tabby. she is a sweetie. she was taken in from a pothead who smoked pot around her. she is part of molly and ivorys group now.
baby: he is 4 years old and a gray tabby. he thinks he is part monkey. he is a jumper and climber. he came from the neighbors. we finally told them not to get another cat ever. they havent since. he was in their backyard with the huge dog and was trying to get away from teh dog when we took him.
piper & flair: they are 3 year old babies stolen in the dark of the night from the projects. they were out eating scraps and were eat up with fleas. flair is a solid black boy who is always sleepy. and piper is a white cat with black markings and a baby. she is the toughest one we have.
angle: she is a 3 year old solid black girl. she was found walking the streets. and now is part of the piper and flair group. she adores them and is the biggest rough houser ever.

well that concludes introductions. they are all well taken care of and up to date on shots and all are fixed so we wont have any babies. good we have enough as is. so all are well fed. and the house is cleaner then most people without cats homes. and they are a happy clan.
Posted by THE ZOO at 9:58 AM 1 comment:

WHO WE ARE/ HOW WE GOT TO BE HERE 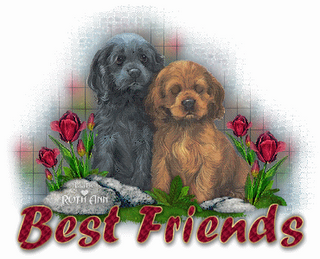 1ST UP IS MALCOLM AND SELENA

THE ARENT TWINS BUT SPENT MOST OF THEIR LIVES TOGETHER.

KING MALCOLM WAS ADOPTED BY THAT BOY FOR HIS BIRTHDAY BUT QUICKLY BECAME THE GIRLS PUP.

QUEEN SELENA WAS THE GRANNYS DOG AND AFTER A FIRE CAME TO LIVE WITH MALCOLM.

THEY ARE BOTH EXCELLENT PUPS AND ADORED THE CATS, ALTHOUGH SELENA DID HAVE TO WHUP THEM ONCE AND AWHILE. SHE WOULD WET THEM DOWN GOOD IN HER MOUTH BUT NEVER BIT ONE. MALCOLM LET THE CATS SPOON HIM WHILE HE WAS ASLEEP.

THE KING HAS RECENTLY CROSSED OVER TO THE RAINBOW BRIDGE DUE TO KIDNEY FAILURE AND A STROKE.
THE QUEEN IS STILL ALIVE AND KICKING ASS, BUT SHE HAS TO GET HYDRATIONS.

JD WAS FOUND 2 YEARS AGO AT SONIC AS A STRAY AND FOLLOWED US HOME CAUSE WE FED HIM. SOMEONE TRAINED HIM BUT NO ONE CLAIMED HIM.
HIS NAME MEANS JUST DOG. HE IS A BORDER COLLIE MIX PUPPY AT ABOUT 4 YEARS OLD. HE WORSHIPS THE KING AND QUEEN. HE IS AN EXCELLENT PUP.

LD/GUS WAS A NEIGHBORS GRANNYS DOG THAT THEY NEVER TOOK CARE OF AND LET RUN. WE TOOK IN THE POOR BOY. HIS OLD WOMAN CALLED HIM GUS. SHE WENT INTO A NURSING HOME AND THEY DIDNT TAKE CARE OF HIM. WE TOOK HIM BACK TO THEM ONCE TRAINED SHAVED AND CLEAN AND HE WAS BACK 3 DAYS LATER FILTHY AND EAT UP WITH FLEAS. LD STANDS FOR LITTLE DOG.HE IS AN OLDER TERRIER MIX. HE IS A GOOD OLD BOY. 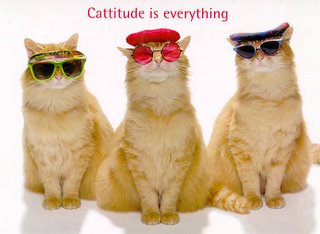 HELLO AND WELCOME TO THE FIRST POSTING OF THE ZOO.

WE IS A GROUP OF POODYS AND 3 WOOFIES LIVING AND LOVING IN THE SOUTH WITH OUR TWO OLD GALS THE MOMMA AND THE SISSY.
THEY WORKED VERY HARD TO KEEP OUR HOME CLEAN AND US WELL FED.
THEY TIRE US OUT SOMETIMES.

THATS ALL FOR NOW.
MORE POSTS TO COME
Posted by THE ZOO at 3:06 PM 1 comment: