We just recently heard Kukkas gonna quit blogging as of Friday. we just want her to know we appreciate her and her hilarious blog for the past year that weve been reading it. Sissy always tells us what Kukka & Brach do each day. We will miss you Kukka.

We had our deck removed this past weekend (yeah the sme deck sissys leg fell thru this past winter) and are waiting for the tree to be removed before we ge our patio installed. It took the guys 2 days to remove the deck and we had half the deck left saturday night and the beans & dogs went out on it to walk the boys and one set of steps was left (on the side torn down) but it was not attahed to anything. well the boys is used to comin up that side and jd was trying his hardest to get back to the beans on the deck and couldnt figure out to go to the other steps. we climbed up those steps and almst fell. Sissy had to go get his.
Posted by THE ZOO at 12:18 AM 6 comments: 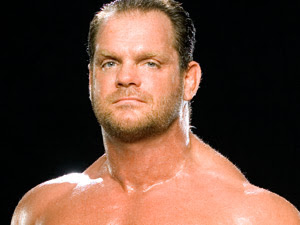 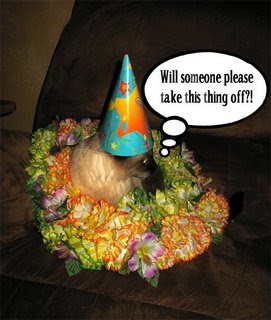 we just learned of chathams passing and are very sorry for his familys loss. at least he had 20 good years with his family. wetook this picture from

his site. and wish to express our condolences to his family.

we also are saddened by the loss of our familys favorite wrestler Chris Benoit who died today at the age of 40 at his home in the suburbs of Alanta along with his wife Nancy and young son Daniel in a murder-suicide.He was more then a wrestler he was a great man who was loved by everyone who knew him. we know you dont all follow wrestling but you can tell by our names our family loves it and he was our familys favorite wreslter ever. He was taken from us too young and senselessly . We will all miss you our "Rabid Wolverine"Many tears are flowing.

the beans took the pups on a sunday drive today and they went to aldis an got a bunch of bread (for feeding the birds, squirrals ducks and geeses) and wendys to get something to eat. the boys got to go for several walks this weekend and wanted to go owt to lunch. they took them to the park like area to see the animals. there were no animals out today for some reason., then they went by another area to see if theres any animals there and nope but for the fishies. it was a pond next to sissys old werk were there normally lots of geeses and ducks. gussie was ready to jump in after the fishes. he wanted them. theys is biggie koi thats several years old. then he went by the building and saw the most beautiful dog he has ever seen and ran to it wagging his tail and boinked his head, it was his reflection in the glass of the building. silly pup.
Posted by THE ZOO at 11:30 PM 2 comments:

we decided to do a blog abowt owr names. wes all named after wrestlers except Salem and Blade. And Acourse the woofers.

J.D. :He was named after the dog on Dead Like me" because the beans didnt want to give him a wrestling name and get attached because they were just fostering him until they did decide to keep him. It means Just Dog.

Gussie: His previous old woman named him and her kids didnt want him after she went into a nursing home. He says his wrestling name is "Gusty Rhodes" and hes a big as Dusty is.

Salem: She was named after the cat on Sabrina the Teenage Witch. She was meant to be named Gizmo but Sissy forgot. She has the attitude he had.

Snow: He was named after wrestler Al Snow and he is white too except his head and tail are blacky/grey.

Shawn: This boy tried to jump owt the window on his way home in the car and hit the window and slid down. Sssy said he wouldve broken her heart. Also because of the crazy jumping he was named after Shwan Michaels, The Heartbreak Kid.

Rocky: As there were 3 kittens together they wanted them to all be named afdter star wrestlers. Rocky wasnamed after The Rock. Rocky was the most feminine name of all the top stars at the time.

Stevie: The beans couldnt tell if he was a boy or a gurl and they theought stevie because stevie could be a boy or gurl name too but they were happpy he turned out to be a boy because he was an awkward lukin gurl. Hes named after Steve Austin.

Hunter & Chyna: twins that came in at the same time and they got the top duos name. Course the duo broke up later but these two luf their names. Hunter is named after Triple H (Hunter Hearst Helmsley) and Chyna (course owr gurl is more together emothionally then her counterpoint). Owr Chyna is tuff but fragile as china is. She lufs to be lufd.

Benoit: We lufed Chris Benoits name and hes owr favorite wrestler. and owr Benny is as beautiful as his name.

Molly & Ivory: two twin gurls came in at the same time and they needed gurly names. Molly is named after Mighty Molly Holly. She wants a pink cape too. Ivory is the tuffest female wrestler arownd and owr Ivory is tuff too.

Raven: A big gurly gurl she has RVDs personality but we couldnt give her RVD as a name. Shes a "duuuude" type of gurl. But we lufed the name Raven and hes tuff as nails and Rey Rey is too. Her nicknames after Rey Mysterio because she was so little when we got her.

Baby: his legal nema iss Hurricane after the wrestler but we thought that was too long to to hollar across the room and as he was the youngest at the time he gets called Baby or Bitty Baby.

Piper, Flair and Angle: We were named after Rowdy Roddy, Rick Flair and Kurt Angle because Piper is rowdy, Flair is a showboat and Kurt Angle tuff as nails and so is Little Angle. Flairs nickname is Peeper because he peeps when he talks.

Well fanks for listin to the story on owr names. Yep theys alot of us but wes happy and takin care of. Owr beans is crazy but they lufs us.

Hi all. wes had a gud weekend and hope eferone else had a gud weekend too. weve been crackin the whip on the beans to update the links list. we did add Cats Lovers site www.allcutecats.blogspot.com to owr links. she had to add them twice, she furgot to save them the furst time.
The beans saved a turtle this weekend. it was crawling into the street at a 4 way stop to get to the wooded area 2 sides away. sissy gotted outa the car and momma told her to carry it to the wooded area and pointed him in the right way deeper into the woods. it pulled its head in when she held him and kicked his lega and arms alot.
the beans also maded some curtains this weekend for the bedrooms bathroom kitchen and laundry rums. we helped alot. bladey smacked and drooled on the curtains and baby knocked the ironing board ofur and got sprayed alot wiff water for helping so much. ivory sat on top the fridge and pointed out where to hook the curtains ofur the sink.
we was watching wrestling "raw" last monday and gussie the dog sat in fromt dancin when Dusty Rhodes came on and he said his new name is gusty rhodes (were all named after wrestlers) he said "cause hes a common dog doin the best he can" and hes an "ammmmerican dreaaam" hes silly. so wes been callin him gusty all week.
we will be adding alot more links in the comin weeks. sissy and momas on baycashun in 2 weeks so they can do it then......The Rock, Can you smell whuts Im cookin
Posted by THE ZOO at 11:56 PM 3 comments: 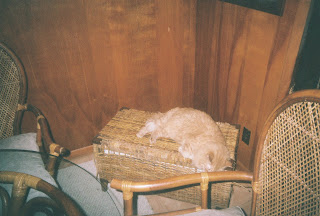 Hi all. This is a picture of me in my most favorite place. my trunk in our dining room. I lufs it. its all the way comfy.I dont need no stinkin' toys all I need is my trunk. . . Raven

Catslover, leaf us your web address and we'll put it in our links. owr sissy is lazy and we has to crack the ship under her booty. She has 'cation coming up and says she'll update our bloggy then.

We has to say we're sorry for the lose of 2 of our fellow blogging kitties Miss Piggy and Suzanne. Purrs and headbutts to all who need them. 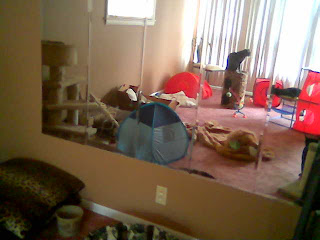 This is me in the mirror oferseeing my kingdom of the cat toys. sissy says ignore how messy it is we had been playing all day.....Bladey
Posted by THE ZOO at 12:10 AM 9 comments:

Hi all.
we gaved up on the sonic kitty. owr beans drove up there eferyday lastweek and this and aint seen no signs of him so wes hopin he has a home or fownded a home in the howses behind the sonic.
and efen though bun bun is ded wes saw 2 bunnies in owr yard this week. so were glad for that.
and we has a cuuute chipmunk in owr yard too.
sissy was takin owr recycling owt one murning this week and an older lady pushing her granddaughter in a stroller stopped and told her how purrtty we all was. she said she walks her granddaughter eferyday and her granddaughter lufs kitties an has a stuffed one and said they liked to luk at us in the window. she said owr flowers are purrty too. the main window we luk owt is ofur the flower box. we sit there all day and watch the bunnies and squirrals and chipmunks and birdies.
owr beans went yard saling today and only spent a dollar but theys camed home wiff a brand new (wiff tags still on them) toys. w got a camoflage bed and a blue pop up tent. it luks like a peeps camping tent but kitty size. they was only 50 cents each. whut a bargain and wes lufs them. we get in the camoflage bed and disappear acause its camoflage. thats lik majic or sumfing. we already has a taco tent like skeezix and a blue and red square tent so now we has free tents. yaaaa.
oh and owr squirral is squrrally. he wanted some peanuts and there was none owt so he got on the owtside shef and tore the baggy open and got them for himself. there was 3 bags owt there and siss went to go put him some owt and found only 2 bags and the third was next to the tree so he mustve dropped it on his way to his tree home. hes a thief we say.
Posted by THE ZOO at 1:17 AM 6 comments: