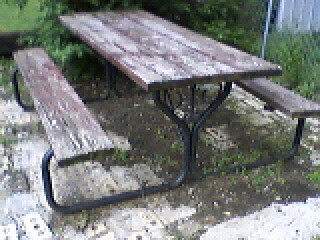 in this pichure behind tha picnic table yoo can kinda see the side of owr plater box wiff railroad ties. tha picnic table iz now gone. sissy had me in her arms fur a second this afternoon (we wuz watchin roxie) and wuz standing on tha top tie yoo can see. she shouldve known better when it rolled owt frum under her. she fell back and cushioned me down until almost tha grownd. i luked at her. roxie turned and luked at us. carlie and jd were in tha howse. sissy checked me owt, got up and we all three went in ta check owr damage. sissy scraped tha back of her leg, has a big bump and bruise and got a hole in her new pants she has ta sew up (small hole). i wuz scared a little but fine and roxie thinks we're crazy. couldve been werse. see tha picnic tables gone but tha concrete slab is there and has alot of rocks on it that need ta be gotten up. craziness.....riley
Posted by THE ZOO at 11:52 PM

YIKES! That could've been bad!

Gee Riley!!! Things happen at your place :o
Good thing all of you are OK :)
Craziness ,heehee
Purrs Tillie and Georgia

We are glad evryone seems ta be OK!

I'm glad to learn you are OK. Sorry about the scrapes. And glad your fall was cushioned!!

Love and Light to you!!


Many pet lovers struggle with finances. Many people are looking for a home business so they can work at home.
At http://homelesscatcare.blogspot.com/ we are looking to create a sizeable monthly income to help with our cat colony. There is a waiting list.
4 short videos tell the story
http://www.everyoneprofits.info/